Somalia-born Halima Aden is only 19, but she’s already walked the runway for major fashion brands, such as Alberta Ferretti, Max Mara, and Yeezy (rapper Kanye West’s clothing and shoe line).

Aden’s modeling career took off late last year, when she competed for the Miss Teen Minnesota USA pageant. While Halima did not win the crown, she made headlines for her decision to wear a “Burkini,” a modest version of the popular bikini bathing suit. 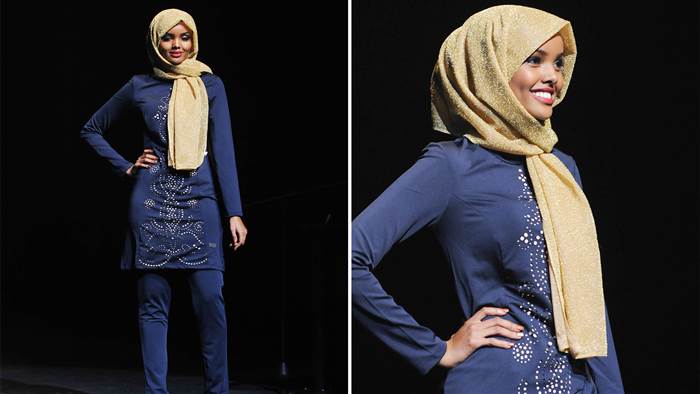 Impressed by Aden’s daring choice of clothing, the influential former editor of Vogue France Carine Roitfeld featured her in a fashion look-book. In no time, Aden was signed to IMG models, the modeling agency that represents international supermodels such as Alek Wek, Ajak Deng, Kate Moss, and Gisele Bündchen.

Aden was born in Somalia and spent some of her formative years in a refugee camp in neighboring Kenya, after her mother fled the civil war back home. Aden would later move to the United States, growing up in St. Cloud, Minnesota.

Like most Somalis, Aden was raised Muslim and grew up wearing the hijab or head cover, which she says is purely a matter of choice for her.

Nevertheless, as a teenager, Aden was bullied about being an alien, with wild accusations that she had no hair under her hijab.

More recently, Aden has had to put up with the antics of some adults who reject the idea of a hijab-wearing fashion model.

About her experience, Aden told the UK Times, “Mostly there was an outpouring of positive comments from people all over the world, but there was some negative reaction too. Really mean comments, like, ‘She’s not the person that should be representing Minnesota,’ ‘rag-head,’ ‘take off the towel if you want to be American.’ It’s things I’m used to from when I was at school, but it was kind of weird because it was coming from grown-ups.”

Aden says she hopes her work as a model will help change public perception about hijab-wearing Muslim women and Muslims in general.

“I wanted to see a hijab-wearing person in a pageant, they [pageant] celebrate women who are intelligent and beautiful but also so much more. A lot of people didn’t see me as a fellow American. They said I couldn’t be Miss Minnesota. I think there’s a lot of power in an image, so if I can send out this timely, positive image about modern-day Muslims, why not?”

She also hopes to inspire a younger generation of women who may feel underrepresented in fashion and popular culture.

“For a long time, I was the complete opposite of what a model could be. I think designers now want to empower women from all different religions and backgrounds,” Aden adds.

Besides her decision to wear a hijab, Aden’s modeling career has managed to shed light on underrepresented minorities and the ongoing lack of diversity in the fashion/modeling industry.

Aden is Black, wears braces, and is barely 5 ft 5 in, which makes her noticeably different from most runway models who are White, nearly 6 ft, and painfully thin.