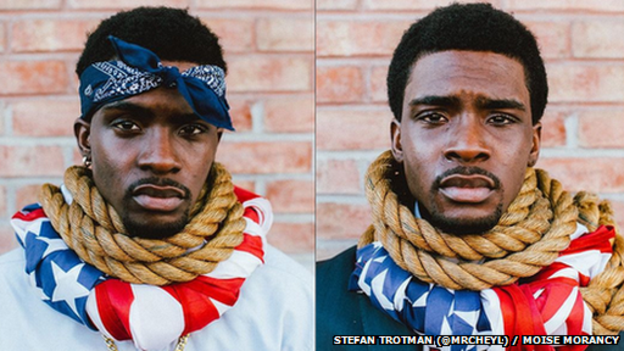 Moise Morancy (pictured), an artist, musician, and actor living in New York, has set both Instagram and Twitter aflame with his bold self-portraits that display both an American flag and a noose wrapped around his neck.

In each portrait, Morancy takes on a different personality  (a graduate, convict, gang member, and professional) to make the point that no matter one’s social ranking or profession in the United States, racism against Blacks doesn’t discriminate. 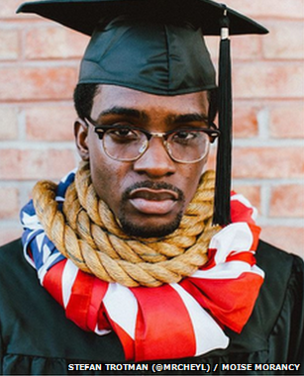 His explosive portraits spurred the hashtag #ItDoesntMatter and has been used more than 20,000 times this week.

On why he decided to take the photos, Morancy says that recently seeing a Black Father advise his son on maintaining a strict dress code was the catalyst.

“He forbid them from wearing dressing sneakers, hoodies, or anything that could be seen as ‘hood’ or ‘ghetto.’

“I’ve given many speeches to youth groups and sometimes misguided young people tell me that the way you dress will give you validation and respect in society. I disagree.

On social media, many agree with Morancy’s stance, writing:

I got my masters at 23. Started my own business at 22. Paid off all my debt at 25. But to the police I’m still a n*gger #ItDoesntMatter

Wo nni Uk papers a #ItDoesntMatter

A powerful depiction of the realities of racism in America #ItDoesntMatter https://t.co/YJ3nDqx4U7 — mia (@bellamiaa3) September 8, 2015

Morancy adds that the “hanging” of African Americans by a racist society isn’t just physical, though.

“I’m not saying I think the president would be treated the same as a gang member,” he says. “And I’m not saying everyone is going to get a noose around their necks. They don’t hang people any more — most of the time.

“But there are different ways of ‘getting hanged.’ Your financial situation might ruin you. You might not get a job because of the color of your skin, so it’s about more than being killed physically — you can get ‘killed’ by racism in many other ways.”