Many people may have heard of Nefertiti, Cleopatra, and King Tutankhamun, but not of Hatshepsut. Known as the “Woman who was King”, Hatshepsut was born into a royal family around 1530 BC. She began as a princess, and then Queen, and she eventually became Pharoah, the King of Egypt, which was highly unusual at the time.

So how did this happen and how was she able to succeed?

Hatshepsut was the only child born to her parents – Egyptian king Thutmose I and his principal wife and queen, Ahmose. Hatshepsut’s father, however, died when she was twelve years old. She married her half-brother Thutmose II, and subsequently became the principal wife and queen. She remained queen until her husband, Thutmose II passed away 15 years later. At age 27, Hatshepsut was now a widow. She and her late husband had a daughter named Neferure. However, Thutmose II had a son Thutmose III with a concubine. The boy was an infant upon Thutmose II’s death, so Hatshepsut served as his regent. And since there was nobody to hand down the title of King to, after her husband Thutmose II passed away, she naturally took his title. 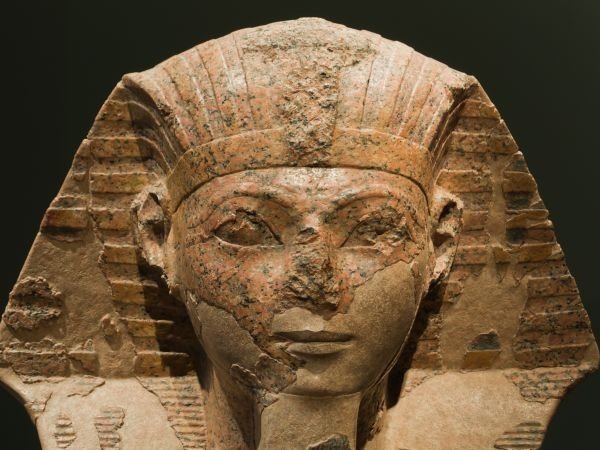 So why was this unusual at the time?

This was because the gods of Egypt at the time had decreed that the King’s role could not be fulfilled by a woman ruling on her own. Hatshepsut, however, paid deaf ears to this and around 1437 BC, she had herself crowned as pharaoh. She even changed her name from the female version of Hatshepsut – which means Foremost of the Noble Ladies – to the male version, Hatshepsu.

She was often depicted in a male form during her reign, with a beard and a male body. She was also dressed in the traditional king’s kilt and crown.

The economy flourished during her time as Pharoah, as she ordered the construction and repairs of many buildings, temples, and memorials.

Her buildings were seen as much grander than her predecessors, to the extent that many of her successors tried to claim those buildings as theirs.  Hatshepsut’s greatest building accomplishment was a mortuary temple built in a complex at Deir el-Bahri, located on the West bank of the Nile.

Hatshepsut died 22 years later after taking her reign as pharaoh, in around 1458 BC. She was buried in a tomb in the Valley of the Kings, in the hills behind Deir el-Bahri.

People did not really mind about her reign until 20 years later after her death when rulers attempted to remove her from their history. Her statues were smashed and buried; her pictures were removed from temple walls, and so on. There were speculations that Egyptians at the time felt that the idea of a female Pharoah was not natural and perhaps wanted to cover up the fact that one ever existed.

However, archaeologists now believe that they might have found some rare relics of Hatshepsut that give proof of her reign. Researchers from the German Archaeological Institute discovered carved blocks that may have belonged to an unknown building during Hatshepsut’s reign on the Island of Elephantine in the River Nile. Researchers said that one of the blocks shows that her name has been etched out and another shows her image as a female replaced by a different king.