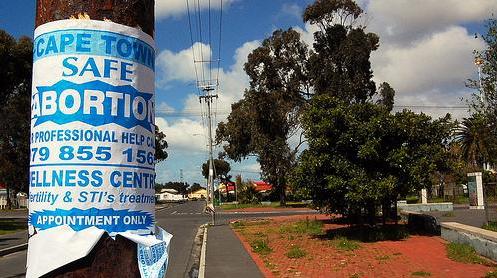 Unsafe abortions claim the lives of about 68,000 women each year across Africa, according to the world Health Organization (WHO).

Although most countries in Africa have legalized abortions within the first 12 weeks of pregnancy, many women still choose to do ‘back street’ abortions, i.e. abortions that are not administered by doctors at hospitals.

Despite the legality of abortion in South Africa, many pregnant women still opt for illegal abortions. This may be due to the target advertising by private doctors who operate in clinics. These doctors print out pamphlets and leave them in various public spaces, including bus stops.

While these advertisements seem to be providing much-needed solutions for unwanted pregnancies, the problem is that many of these doctors do not have the proper equipment to deal with potential emergencies during the procedure. Many patients hemorrhage, which can lead to infertility and death. There is also the prevalent problem of septicemia, caused by unsterilized equipment, which can also lead to death.

Marie Stopes, an organization that provides legal abortions, has a street marketing campaign that warns the public about illegal abortions and how unsafe they can be.

In Rwanda, the situation is much graver. Abortions are illegal throughout the country and, as a result, many more women are at risk. There are about 60,000 terminated pregnancies each year, the majority being unsafe and having complications that require treatment. WHO reports that 1 in every 6 maternal deaths are because of unsafe abortions. The coordinator of Safe Abortion Action Fund (SAAF), Chantal Umuhoza, warns that the 60,000 terminated pregnancies are reports from health facilities but most abortions are carried out in other settings.

Legalizing abortion in Rwanda would help decrease this alarmingly high rate of deaths resulting from unsafe abortions. Unwanted pregnancies will happen regardless of legislation, as will unsafe abortions if they are not provided by a medical facility.  With Marie Stopes and various women rights activists in South Africa fighting against them, hopefully Rwanda will follow suit and make a first step to legalize abortions.