Sarah “Sally” Hemings was a slave owned by President Thomas Jefferson through an inheritance of his wife, Martha Jefferson. Never marrying, Hemings bore six children with Jefferson, four lived until they were adults. 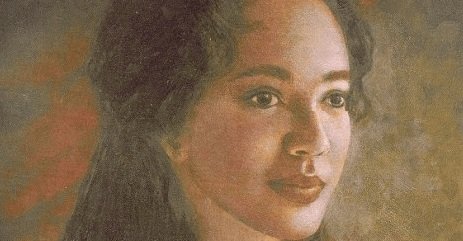 Hemings was born in Charles City County, Virginia in 1773.  She is the descendant of an African slave and English sea captain; her grandmother Susana and John Wayles, Susana’s owner.

Hemings’ mother, Betty, also bore children with her master, John Wayles. Wayles was a lawyer, slave trader, planter and the father-in-law of Jefferson. Wayles migrated from Lancaster, England to Virginia in the 1730s.

Hemings came to the Jefferson household as a baby. Being that she was of mixed race, she was awarded the privilege of being a domestic worker. This meant she did not have to work the fields.  Her duties also included nursemaid-companion, chambermaid, seamstress and lady maid.

In 1784, Jefferson was selected as the American Envoy to France.  His daughter Martha (Polly) and Hemings accompanied Jefferson on the trip. Hemings was selected to accompany Polly when another slave became pregnant and was not able to attend.  Hemings was a teenager at the time.

Hemings stayed in France for 26 months. Slavery became abolished in France after the revolution in 1789. Subsequently, Jefferson paid Hemings $2 dollars a month.  Hemings was able to learn French, accompany Martha to formal gatherings as a lady’s maid and stay in Jefferson’s villa on the weekends.

Hemings was legally permitted to request for her freedom and remain in France. At 16 years of age, Hemings became pregnant by Jefferson. She returned to the United States due to Jefferson’s promise of releasing their child when he or she reached 21.  Hemings also wished to be near her immediate family members who were in the U.S. Jefferson was a widower during this time.

Not out of the ordinary, wealthy white men in Virginia frequently held long-term relationships with their female slaves. They were expected to be inconspicuous about their affairs.

All of the Hemings children were required to run light errands and at the age of 14, all began training for their respective roles.  All three of the Hemings boys were given the opportunity to learn how to play the violin.

Hemings and her children were allowed to live at Jefferson’s plantation named Monticello, even after his death. Her daughters, Beverley and Harriet, left Monticello. Harriet was given money to travel to the North.  Neither were tracked down. They later assimilated into white society in Washington, D.C.

Sons, Madison and Eston, married free women of color in Charlottesville. They later moved to Chillicothe, Ohio. Due to the Fugitive Slave Act of 1850 and an increased chance of being recaptured into slavery, they moved to Madison, Wisconsin. Eston changed his name to Eston H. Jefferson. He and Madison lived in a white community onward. Nonetheless, Madison’s family members identified as black.

Hemings was not put up for auction and was allowed to live freely in Charlottesville.  She lived at Monticello until her death in 1835.