Theunis Botha, a professional big game hunter, was crushed to death during an ill-fated hunting expedition in a game reserve in Zimbabwe.

Botha, 51, of South Africa was leading a hunt with clients when the group accidentally walked in to the middle of a breeding herd of elephants at the Good Luck Farm near Hwange National Park late Friday afternoon, the Telegraph reports.

After Botha reportedly fired a shot, three elephant cows charged at the hunting party. Botha was oblivious to a fourth cow that charged at him from the side, which hurled him upward with her trunk.

Another hunter responded to the charge by firing at the elephant, causing the animal to collapse and fall on top of Botha, crushing him.

Not surprisingly, elephant Mothers — like many other wild animal species — are fiercely protective of their young, especially during breeding season.

Close associates describe Botha as a highly regarded houndsman who frequently led leopard- and- lion-hunting safaris with his pack of dogs. Some of his patrons included wealthy Americans who he led on trophy-hunting expeditions around southern Africa.

Monteira hunts refers to a time-tested method of hunting, where large packs of trained dogs are used to drive wildlife such as deer and boar toward the hunters who then open fire on the animals. 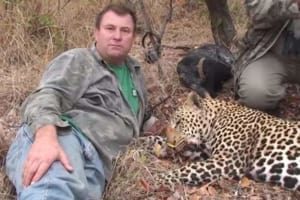 Botha is survived by his five children and wife, Carika Botha, who announced his death on Facebook over the weekend.

Botha’s death comes on the heels of Scott Van Zyl‘s death; Van Zyl is another well-regarded professional hunter who was a close friend and colleague of Botha.

Van Zyl,44, was reported missing on April 7th, after he disappeared during a hunt at the Chikwaraka camp in Zimbabwe. Days later, his backpack was found on the banks of the Limpopo River.

During a more extensive search for his body, two crocodiles were shot dead and DNA samples taken from the contents of their stomachs matched with his.