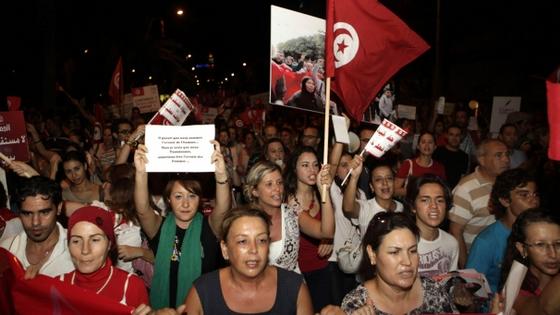 Thousands of Tunisian women have gathered in the capital, Tunis, to protest against moves by their government that they fear will incapacitate women’s rights.

According to the BBC, the Tunisian government unveiled a draft constitution which refers to women as “complementary to men." Needless to say, the women of the country saw this as an indication of the sexism to come in future legislation.

Before the Islamist Ennahda party won elections last year, Tunisia was one of the most secular Arab states. Their 1956 constitution dictated that both genders were equal, banned polygamy, and introduced civil divorce and marriage.

The chair of the Ennahda constitutional assembly’s human rights and public freedoms panel,said the wording of the draft constitution was not a backward step for Tunisian women, Reuters reports. She said that instead, the draft states the “sharing of roles and does not mean that women are worth less than men.”

Ahlam Belhadj, the chairperson of the Democratic Women’s Association, begged to differ. "Major retreats usually begin with one step," she said. "If we stay silent today, we will open the door to everything else and end up surprised by even more serious decisions."

The protests began Monday evening after the end of the daytime fast during the Muslim holy month of Ramadan.