Zambian police have been prohibited from marrying foreigners in a move that is aimed at improving security in the country, according to the BBC.

The order was issued last week by the country’s inspector general of police, Kakoma Kanganja, through a memo that has been doing rounds on social media: 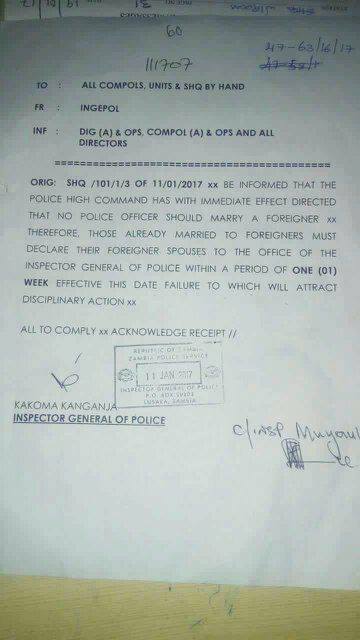 About the ban, Zambian Police Spokesperson Esther Katongo said, “Issues of security are delicate. If not careful, spouses can be spies and can sell the security of the country.”

According to Katongo, the ban has been in existence for a long time, but some officers had begun to ignore it. She added that the failure to adhere to this directive will result in serious disciplinary action.

For police officers who have already married foreigners, Katongo said they will be given new rules to follow, adding that the country’s security is paramount.

“You know what marriage is – you share secrets. And you can tell officers, ‘Do not disclose,’ but you have no control. You won’t be in their homes to always check on them,” Katongo added.

The new directive has elicited mixed reactions, with some Zambians accusing the inspector general of police of infringing on the rights of his officers. Others are questioning the constitutionality of the ban, asking whether it is a crime to marry a foreigner.

Donald Trump is married to a foreigner.

But some people seem to support the order saying it is good for checks and balances:

If you are not in security, you can’t understand anything…good move comrade…let’s be security conscious at all times, Hydon Mudenda wrote.

Such extreme security provisions are not exclusive to Zambia. In the United States, for instance, Central Intelligence Agency (CIA) agents are allowed to marry foreigners as long as the spouse agrees to become a naturalized U.S. citizen within five years and clears all the necessary security checks.

While the CIA doesn’t prohibit its agents from getting romantically involved with foreigners, it discourages this behavior by turning such marriages into bureaucratic nightmares.

In fact, it is common practice for governments to discourage their security agents from marrying foreigners in an effort to avert foreign influence.