Germaine Djuidje Kenmoe from Cameroon and Dawn Iona Fox from Guyana have won the prestigious OWSD-Elsevier Foundation Awards for Early-Career Women Scientists in the Developing World.

The high-profile award aims to recognize the scientific and career achievements of women from developing countries in five regions: Latin America and the Caribbean, the Arab region, Sub-Saharan Africa, Central and South Asia, and East and South-East Asia and the Pacific. The theme for 2018 was physical sciences, including chemistry, mathematics and physics.

Kenmoe and Fox are two of five women scientists from the developing world to have received the international award for research that promotes socio-economic development and a better quality of life. Dr Germaine Djuidje Kenmoe is an Associate Professor at the University of Yaoundé, Cameroon and her research focuses on molecular friction-and-wear which has the potential for important applications in the area of energy efficiency. 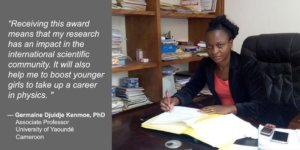 Dr Dawn Iona Fox is a lecturer at the University of Guyana’s Turkeyen Campus and her research focuses on converting local waste products into materials to solve environmental problems. Her current work aims to improve drinking water quality at the household level for vulnerable communities and on ‘water-stress’ events such as floods, storms and hurricanes. 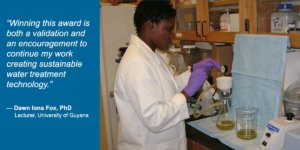 The women were presented with the cash prize of US $5,000 and all-expenses paid attendance to the annual meeting of the American Association for the Advancement of Science (AAAS), which took place in Austin, Texas this month (15-19 February).

But the recipients’ biggest reward is the exposure and networking synergies such a recognition provides, which is critical for STEM development in Africa and the Diaspora at large.

Ylann Schemm, director of the Elsevier Foundation, explained: “visibility and role models are critical for early career women scientists, and even more so in developing countries where women often face compounding societal pressures. This year, we have awarded our 7th group of winners and I can vouch for the impact this has on their careers: opening doors to new research assignments, greater mobility and enhanced international collaboration opportunities.”

Nominations for the 2018 awards opened in June 2017 and were accepted from early-career women who had received their PhDs within the past 10 years and were working in the physical sciences. The women had to also live in one of the 66 scientifically lagging countries identified by The World Academy of Sciences.