The state-owned Herald newspaper reports that the 94-year-old Mugabe offered the gift to Gumbochuma, the first lady’s eldest sister, for the pivotal role she played in raising the first family’s children.

Mrs. Gumbochuma, an ordained pastor, celebrated her 60th birthday anniversary during a church service at one of Mugabe’s farms in Shamva, northeast of Harare. 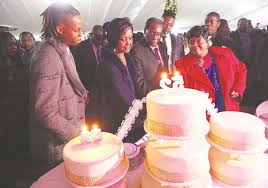 She was presented with a cash gift of $60,000 by President Mugabe and his wife, Grace, while their children, Russell, Robert Junior, Chatunga, Bona, and her husband, Simba Chikore, gave her an additional $10,000.

President Mugabe reportedly seized on the occasion of the birthday to condemn Pentecostal preachers who fleece their congregants by stage-managing miracles. He also advised the congregation to worship God directly instead of relying on so-called men of God.

Mugabe also described it as shocking that some pastors were flocking to places as far as Nigeria in search of God.

In recent years, Zimbabwe has witnessed a mushrooming of Pentecostal movements whose often youthful pastors stage manage miracles to entice congregants to give money and other valuables by demanding tithes, offerings, and personal donations.

Meanwhile, over the last decade, the Zimbabwean economy has struggled against runaway inflation, pervasive public sector corruption, and a shortage of foreign currency that has been worsened by a series of economic sanctions imposed on the Mugabe government by Western countries.

The country’s public salary wage bill reportedly uses up to 91 percent of all total revenue and the economy has halved in size since 2000.

Earlier in the month, the management of Air Zimbabwe, the country’s national airline said that it was overstaffed and announced the sack of 200 of its employees or nearly half of its work force in what it described as a restructuring exercise.