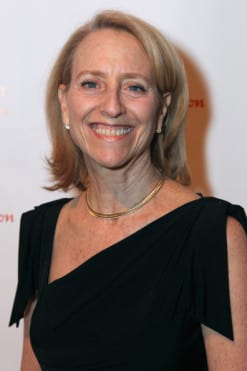 “The Ubuntu Award reminds us that we are only human through the humanity of others. It is a profound privilege to share this award with the distinguished FACE List honorees — and more so with communities across the African continent who demonstrate daily the depth and breadth of that humanity, and work to build a more just world.” – Donna Katzin

“The end of apartheid was Part One of the struggle. Part Two is the more difficult: To make the miracle endure…We asked you to disinvest. Now we say to you ‘Invest. Make South Africa succeed. For the sake of the world.”– Archbishop Emeritus Desmond Tutu

Shared Interest was launched in 1994 in response to the call for investment and restructuring in a country that had been torn by apartheid. Led by Donna Katzin as the founding executive director, the organization pioneered the use of partial loan guarantees to encourage commercial banks to lend to low-income black townships and rural communities throughout South Africa. Since then, Shared Interest has emerged a leading social investment fund that mobilizes the financial and human resources of South Africa’s lowest income communities of color.

Since 1994, Shared Interest through the leadership of Donna Katzin has helped to create more than 180,000 new small and micro-enterprises, 1.9 million jobs, and 120,000 affordable homes – benefiting more than 2.2 million economically marginalized South Africans. The organization is now extending its work to other Southern African countries, including Swaziland, Mozambique and Zambia. 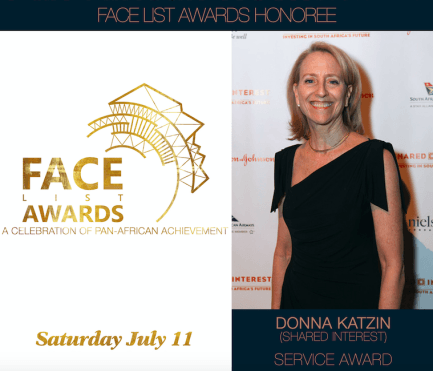 A board member of the Thembani International Guarantee Fund in South Africa, and the Center for Community Change in the U.S., Katzin holds a doctorate in Human Services Education and Development and has written extensively about South Africa, community development and impact investing, and is also the author of With These Hands, a volume of poetry inspired by the birth of South Africa’s democracy.

“The Ubuntu Award is a new category that was inspired by Donna Katzin. Her service, compassion, and life-long commitment to the people of South Africa truly define the meaning of Ubuntu. We are proud to launch this permanent category to recognize outstanding leaders and visionaries of non-profit organizations like her,”  said Face2Face Africa CEO Isaac O. Babu-Boateng.

Katzin will be honored at the 2015 FACE List Awards Dinner on Saturday, July 11, at ESPACE Ballroom in New York. Click Here for Tickets.