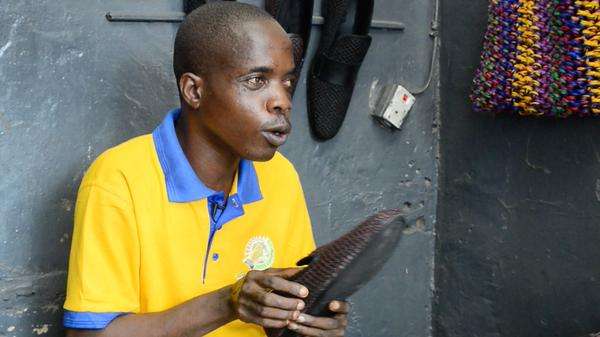 Endurance Otobi is a blind cobbler

He was not born blind but started having issues with his sight while he was in primary school. Getting to the and by secondary level, he realised that the condition had deteriorated.

He became blind in 2002 after what doctors would later tell him was caused by glaucoma. Due to lack of funds, Otobi was not able to pay for his surgery to treat his condition and this forced him to stay home from 2002 to 2009 until he managed to enrol at the School of Blind, Oshodi, in Lagos, where he was taught how to weave bags.

In 2010, Otobi started weaving bags and teaching others the skills but the idea to mend shoes began when he got the opportunity through the support of friends to be enrolled at Equipment Life Foundation, at Oshodi, Lagos.

With an earlier support from a cobbler, Kazeem Alieu Abiola, Otobi started mending shoes while weaving bags at the same time. He now runs a small shop where he weaves, sews and crafts bags and shoes.

Below is a video of Otobi telling his story: