Twenty-seven-year-old Ghanaian Sangu Delle (pictured), who is the founder of Golden Palm Investments Ghana Limited (GPI), recently delivered a Ted Talk on his work and vision as an investor in Africa, insisting that the way forward on the continent is to invest in savvy entrepreneurs who can create jobs and wealth across Africa on the scale of Sudanese billionaire Mo Ibrahim.

GPI selects start-ups throughout Africa and invests in them with the hopes of creating — what Delle calls — lucrative “world-class companies” that also have a social impact.

In order to put his business model in to practical use for his audience, Delle, who is also Face2Face Africa’s 2014 Young Africans Committed to Excellence (YACE) honoree, began his “In Praise of Macro — Yes, Macro — Finance in Africa” Ted Talk by rejecting the theory that the answer to Africa fulfilling its potential is through microcredit.

We seem to be fixated on this romanticized idea that every poor person in Africa is an entrepreneur.

Yet my work and travel in 40 plus countries in Africa has taught me that most people want jobs instead Delle says.

What Delle sees as the true answer for Africa, though, is all that Ibrahim represents as a businessman throughout Africa.

“Mo Ibrahim took a contrarian view on Africa when he founded Celtel International in 1998 and built it into a mobile cellular provider with 24 million subscribers across 14 African countries by 2004.”

To Delle, Ibrahim pushed the envelope and redefined what it means to do business in Africa by setting up his business across borders and communities. 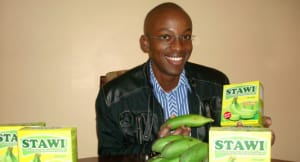 For example, rather than loaning $200,000 to 500 banana farmers, GPI decided to back 26-year-old Kenyan entrepreneur Eric Muthomi (pictured) so he could open a factory that produces gluten-free banana flour and baby food products called “Stawi.”

Delle explains, “Stawi is leveraging economies of scale and using manufacturing processes to create value for not only its owners but also its workers who have an ownership in the business.”

And as with Ibrahim, central to Delle’s strategy is a pan-African approach.

Therefore, Muthomi isn’t just doing business in Kenya; in fact, he is promoting his products to multiple African countries.

“And that’s why we are expanding Stawi’s markets to Algeria, Nigeria, Ghana, and anywhere else that will buy our food,” Delle says.

“Our dream is to take an Eric Muthomi and try to help him become a Mo Ibrahim.”

Delle, who is a proud pan-Africanist, took the time to explain the historical context of why present-day African business, economics, politics, etc., is mostly “fragmented.”

“[During] the scramble for Africa during the Berlin conference of 1884 — we Africans weren’t exactly consulted.

“[Berlin] resulted [in] massive fragmentation and many sovereign states with small populations.

“Pan Africa gives you $1 billion people…our ancestors traded across the continent before Europeans drew lines around us.”

And for Delle, harnessing the resources, population, and power of the entire continent is the ultimate way forward for Africa.

“We hope to help solve food insecurity and develop jobs in the local economy and become rich in the process.

“The political freedom for which our forebears fought is meaningless without economic freedom.

“We hope to aid this fight for economic freedom by building world-class businesses, creating indigenous wealth, and providing jobs that we so desperately need.”

And Delle is doing it!