Ghanaian and Pescara football club of Italy midfielder Sulley Muntari left an Italian Series A football match Sunday against Cagliari to protest the racist chanting he received from a section of opposing supporters.

The 32-year-old midfielder complained to the referee about the racist chants but was instead punished for dissent, prompting him to take action by walking off the pitch in the 90th minute, according to Goal.com.

Muntari told reporters after the match that Cagliari supporters spewed racial hatred throughout the game but what he found particularly disheartening was seeing children involved in the obscenities. 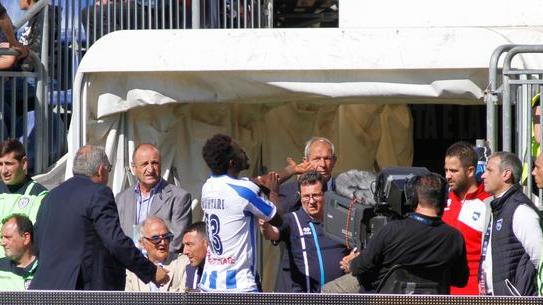 Ghana’s Sulley Muntari was shown a yellow card for protesting the racist chants thrown at him by opposition supporters.
Photo credit: IOL

“There was a little kid doing it with his parents standing nearby, so I went over to him and told him not to do it. I gave him my shirt to teach him that you’re not supposed to do things like that. I needed to set an example so he grows up to be nice,” said Muntari, who once played for Portsmouth FC of England and won the FA cup trophy with them in 2008.

“[The referee] told me I should not talk to the crowd. I asked him if [he] had heard the insults. I insisted that he must have the courage to stop the game,” Muntari added. “The referee should not just stay on the field and blow the whistle; he must do everything. He should be aware of these things and set an example. I am not a victim, but if you stop the matches I am convinced that these things won’t happen anymore.”

Pescara coach Zdenek Zeman said Muntari should not have left the game, but he urged match officials to take a stronger approach to tackling racism.

“Muntari asked the referee to intervene, but he did not do it,” he told reporters. “We talk so much about racism, but then we just move on. This happened to Muntari who has played in Italy for several years – we want to change the mentality.

“He left the field because of the chants, but we should not have to take justice in to our own hands.”

After Muntari left his team to play the last few minutes of stoppage time with 10 men, Pescara ultimately lost 1-0 to Cagliari.

Elite football in Europe, particularly in the Italian and Russian leagues, has struggled for years with racism. In 2013, Ghanaian and AC Milan of Italy midfielder Kevin-Prince Boateng also walked away from a friendly match between Milan and fourth division club Pro Partia to protest the racist chants directed at him by a section of the opposing supporters.