What made Cameroonian-born woman, Olivette Otele pursue history was her “need to understand who we are as human beings and what led us to such uneven relationships.”

“I wanted to work on poetry/literature but a huge sense of injustice and the need to inquire into the roots of inequality took over. I wanted to study power struggles and resistance movements in societies. Clio might be personified as a woman, but for centuries women’s work as historians was not deemed relevant. I wanted to help change that,” she said in a recent interview with The History Vault.

The historian of transnational colonial history at the College of Liberal Arts at Britain’s Bath Spa University has just made history as the first black woman to become a history professor in the UK, History Today magazine has said.

Congratulations to @OlivetteOtele on becoming the first black woman to be made a professor of history in Britain. Here she is ‘On the Spot’ earlier this year. https://t.co/UxwAKFnNGi

Otele, who has become one of the many black women climbing the ladder of educational leadership achieved this feat after being awarded a professorship in history by the Bath Spa University.

The academic herself tweeted the news, saying that she was optimistic that her appointment would open doors for “many hard-working women, especially women of colour… and specifically black women in academia.”

BIG NEWS: my people, @BathSpaUni has awarded me a professorship and a Chair in History.
May this open the door 2many v hard working women, especially WoC, even + specifically Black women, in academia in general & in History in particular.
In strength, peace and love my ppl.

Otele, who schooled in France but is currently teaching in the U.K. had been a student of the French institution, Universite La Sorbonne, Paris where she received her first degree in Literature and History two decades ago.

Otele is the recipient of UK and EU research grants about the history and memory of people of African descent and has made appearances on French, Canadian, and British radio and TV programs.

Her doctoral area of specialisation was European colonial and post-colonial History and this included examining questions related to the transatlantic slave trade, slave societies, identities and post-colonial societies in the Atlantic world, according to Bath Spa University.

Her BA and MA training was grounded in British and American Literature and History, the University has said on its website.

“Her current research centres around transnational history and in particular the link between history, collective memory and geopolitics in relation to British and French colonial pasts. She charts and analyses the ways in which Britain and France have been addressing questions of citizenship, race and identity through the politics of remembrance. She also enquires into the value of public gestures, the meaning of public history and the impact of cultural memory.

“Dr Otele welcomes potential PhD applications in the fields of colonial history, the history of British and French Empires, memory, slavery and legacies, contemporary France and social cohesion, and the history of people of African descent (including women and North Africa),” her bio on the University’s page read. 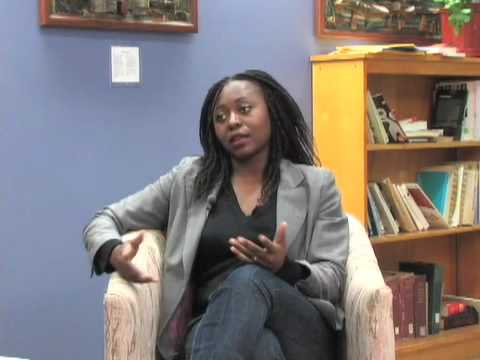 Dr Olivette Otele has appeared on many radio and TV programmes

For someone who spends her days at the archives when she is not teaching or without family commitments, Otele once said that if she were given a time-machine for twenty-four hours, she would “go back to spend one day with Queen Nzinga in the 1630s-1640s and learn about her tactics and strategies as a military leader and a diplomat who fought against the Portuguese colonisation in what is known nowadays as Angola.”

Last year, the Cameroonian academic spoke of plans of indulging in writing poetry and novels about historical events and the people connected to them, adding that her favourite book has always been The Travels of Ibn Battuta since it takes her to “far far away lands”.

The seas and oceans are her favourite historical sites, as, according to her, they have made a tremendous contribution to the birth of modern societies in many wars. “They are places of war, rebellion, exchange, trade, human connections, etc,…” she said.

Otele loves her time spent at home writing or engaging with activists and community members and has this strong message on the relevance of history today:

“I still (naively I’m told) believe that understanding the past and who we are as people will show us the way forward. History is about sharing stories and coming together as communities of people. That’s why one of my main areas of research is memory and memorialisation of the past. I often hear that history repeats itself. It doesn’t really. What does repeat is our desire to ignore history and place our own insecurities and greed above our ability to create beauty and bring about equality. So, understanding that each one of us has the power to make our world an interesting and wonderful place is crucial. Historians don’t just tell stories. They engage with the workings of human nature. Even ‘just’ telling the story is a powerful act that can be turned into a tool for social justice.”

Meanwhile, congratulatory messages have been pouring in for the academic since she posted the recent news of her professorship:

This is such incredible and wonderful news. I’m just so happy. It’s also wonderful for our discipline. May you be the first of many, many more. A huge, huge congratulations and have an amazing time celebrating Professor Otele, x

Wow!!!! Big Up @OlivetteOtele. This is fantastic news and well deserved. Historian making history as the first black woman professor of history ❤️??✊?

Excellent! So very glad your contributions have been recognised. And then….. there were 26 Black female Professors. #raceinHE #highered

The historian making history! Huge congratulations! So pleased for you!

Fully deserved. All @HurstPublishers look forward to working with you on your 2019 publication, ‘Afro-Europeans: A Short History”.

Congratulations! Looking forward to toasting your success on Thursday…

Congratulations! So well deserved and @BathSpaUni are lucky to have you!