Second Lieutenant Thokozile Muwamba has made history as the first female fighter pilot in Zambia, an achievement viewed by many as a major step toward ending the existing gender disparity in the profession.

The 24-year-old lieutenant joined the Zambian military in 2012 after her first year in university and was enrolled in the male-dominated Zambian Air Force program to train as a female fighter pilot, reports Africa News.

There, Muwamba was intent on pursuing her dream of becoming a pilot.

“I look at the fact that when I am in the airplane, the aircraft knows no sex as it depends on my input even if I am a woman. I can also give it the right steering for it to respond correctly,” Muwamba says.

The decision to train female jet fighters in Zambia was announced in 2015 by the country’s Air Force Commander Lieutenant General Eric Mwaba Chimese who said the program was designed to promote gender equality in the country.

Brigadier-General Kapungwe, who commands the Zambian Air Force base in Mumbwa, believes that having the first female fighter pilot is a clear indication that women are progressing. He hopes to see more women in Zambia become fighter pilots in the future.

“Men are not a competition but counterparts that one should work with, and hence women should begin to participate and realize their abilities. Because of this understanding, I am ready to undertake this task ahead of me,” Muwamba added.

Muwamba says her success came from hard work, determination, and inspiration from her family members and instructors.

Her advice to other women is that nothing is impossible as long as you are determined to achieve it. 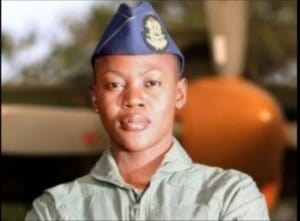 The number of female fighter pilots, not just in Africa but around the world, is significantly low compared to that of men.

Nigeria welcomed its first female fighter pilot, Blessing Liman (pictured), in 2012 who at the time was the only female military pilot in all of West Africa.

In an attempt to explain this disparity, an Australian sociologist and a member of the Australian Air Force Deanne Gibbons conducted a study that revealed that young girls view piloting as difficult, dangerous, and more of a man’s job.

Gibbons further reported that views about what characteristics come with being a typical pilot were extremely strong, with a number of girls insisting that they wouldn’t be right for a career in flying because they lacked the typical traits of a pilot such as “arrogance, overt confidence, and [a] lifelong obsession with aviation.”