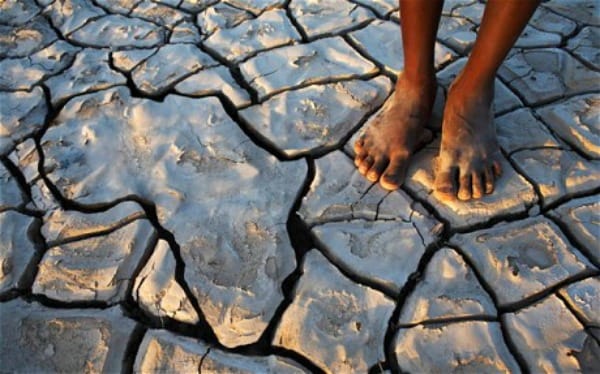 And even though Asia, Europe, and the United States are most responsible for GHG and CO2 emissions due to fossil fuel use, Africa — which has the lowest emissions in the world — and Asia are the continents of the world where populations will be “injured, left homeless, displaced, or require emergency assistance due to floods, droughts, or extreme temperatures.”

Consequently, the United States, the United Kingdom, Canada, Germany, and France agreed to give a total of $150 million to the ARC.

And by Friday, the 196 COP 21 participating countries also agreed to collectively reduce their carbon emissions “as soon as possible” in order to keep global warming “to well below 2 degrees C.”

The ARC puts resources in place to manage the natural disasters and droughts that climate change is causing — and will cause — on the continent.

Unfortunately, climate change’s impact on Africa is expected to be dramatic, according to United Nations Environment Program.

For example, in just five years, between 75 to 250 million Africans are expected to be exposed to water stress or a deterioration of freshwater resources.

Also in 2020, the yields from rain-fed agriculture should be cut in half, further compromising food security and nutrition.

And the effects of climate change can be felt on the continent right now.

Botswana, Malawi, Mozambique, Namibia, Angola, Zimbabwe, Swaziland, and Zambia are all currently experiencing reduced harvests for the 2014/2015 season due to El Nino, warm water that covers the surface of the eastern equatorial Pacific every three to seven years.

According to Climate Central, “…particularly strong super El Ninos are likely to occur twice as frequently in a warming world” due to climate change.

El Nino caused heavy rains in the U.S. South, wildfires in Indonesia, landslides in Peru, and the cratering of the anchovy fishery in the eastern Pacific between 1997 and 1998.

“These and other impacts were responsible for an estimated $35 to 45 billion in damage and 23,000 deaths worldwide,” Climate Change contends.

Speaking to how Namibia, in particular, has been affected by climate change, Pohamba Shifeta, the Environment and Tourism minister, said while attending COP 21, “Over the past 100 years, Namibia witnessed a record temperature rise of about 1 degree Celsius. This temperature rise can be linked to the ever and frequent droughts and floods in Namibia. Scientific studies indicate that these current climatic events are indeed a warning signal of more catastrophic events to come.

“And for dry countries like Namibia, the situation will worsen as temperatures continue to rise. This situation will affect food and water security due to drought and also negatively affect the livestock industry, which represents about 70 percent of the total agricultural outputs.”

This year, alone, the ARC gave $26 million to Senegal, Niger, and Mauritania in order to stem the effects of their respective droughts.

And while the ARC currently covers eight African countries, in five years they are looking to increase their coverage to 30 nations facing floods, cyclones, and droughts.