Oba Ewuare became king of Benin City in modern-day Nigeria after overthrowing his brother Uwaifiokun in what is described as one of the most violent coups and sibling fights in African ancient history. The coup and fight for power led to a serious war that destroyed more than half of the city of Benin which Oba Ewuare later rebuilt. He is known to be the greatest Oba of the Benin Empire who possessed magical power like no other Oba.

The story of his life is present in many traditional cultures in Nigeria and Benin and is often told through folktales and songs due to the ancient oral tradition of the people. Many facts about his life are disputed by historians because of the mysterious magical aspect of his life and the fact that history was told by word of mouth rather than documented but this does not dispute the facts about this great Oba who once lived and reigned over the Benin Empire. Spiritual power and magic have also been a great part of African traditional societies, however, these facts have been sidelined due to modernity and westernisation.

There are many stories about how he became king but the most popular one accounts that he was the eldest son of Ohen. Ohen’s lineage was among the Uzama group, the only group with authority and power to appoint an Oba for the Empire.

At birth, he was known as Prince Ogun and illegible for the throne at the death of his father. But after his father died, his younger brother Uwaifaikon was appointed as the Oba and Ewuare was exiled. In some folktale stories, it is suggested that at the death of their father, both Ewuare and Uwaifaikon were banished from the city for reasons yet unknown, but Uwaifaikon managed to find his way back, lied to the Uzama people about the harsh and cruel treatment he faced under his brother and had to flee for protection. He was then made the Oba.

While in exile, Ewuare travelled extensively and became a strong warrior with his name reaching far and wide. The people of Benin lived under harsh conditions under his brother and secretly prayed for his return. Ewuare is largely known to be a powerful magic man. While in exile, he attained favour from the ancestors of the land and was favoured with the spirit of the forest. He performed a magical spell that granted a spell called Agbavboko. With this came a magic bag that had enough space to keep important things and grant him anything that he needed.

Ewuare was moved to sleep under the sacred uloko tree and is said to have had a dream where the spirits told him to return to the Benin Empire. On his journey back to the city, Ewuare removed an infected thorn from a lion that then gave him a talisman with powerful magic making him powerful and offering protection.

To mark his arrival, Ewuare set a huge part of the city on fire using his Talisman and raided the royal home killing his brother with a poisonous arrow which he took out of his bag. At the death of his younger brother, he claimed the throne and officially became Oba Ewuare I. 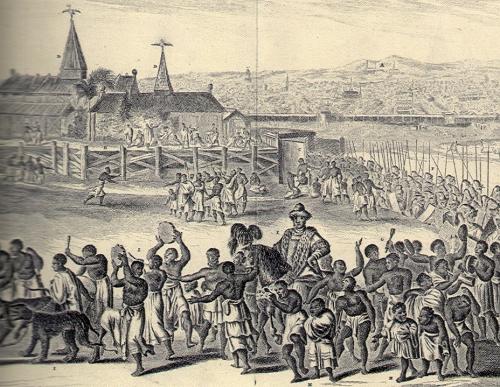 Oba being carried by warriors in Benin Empire

Oba Ewuare ruled as king for 23 years from 1440-1473. He will later be known as Oba Ewuare The Great King. He rebuilt the Empire and made it a more protected and beautiful Empire. He reduced the power of the Uzama people in the Empire which naturally annulled their power of appointing the Oba and made it a succession of the first son. This reduced conflict among the Empire and brought the people closer together.

He also created administrations in the towns and villages to have better control over the structure of society and not make the Oba have the sole power. This did not reduce the power of the Oba but rather made his rule more structured and controlled.

He established a strong army for the Benin Empire and made the Empire a strong and feared one among other Empires. Through his magic, Ewuare is said to have protected his people from ailments and strange curses and healed people easily.

Due to the favour he had from the spirits and gods, the Empire flourished in trade and farming under his rule and the people lived at peace.

It was during his reign that the first Portuguese explorer and trader Ruy De Sequeira arrived in the Benin Empire in 1472 and was received warmly and established a powerful trade system between Portugal and the Benin Empire. He was also instrumental in making the Empire a great ivory and wood carving site and created the Bronze heads for their ancestors who ruled before him, a tradition that carried on after his death.

Today many of the monuments are found in museums in France and other parts of Europe and African leaders are fighting for the return of the historical objects. Not much is spoken about how he died but his second son took over his reign due to the fact that his first son was assassinated.