Just weeks after Choice FM's DJ Abrantee launched his own Afro-beats show inLondon, the genre seems to be having a sway on mainstream music with artists such as Snoop Dogg, Sway and Tinchy Stryder confessing to be fans.

Hiplife which originally derived from Afro-beats is Africa's version of Hip Hop. Themusic genre thrives everywhere in Africa especially Ghana and is now hotting the dance floors in the UK. Alordia, West Coast UK and Abrantee, the same organisers that brought the Indigo O2 Ghana Independence will be bringing you the Hiplife Festival and After Party. The 20th of August 2011 will see a line up of Ghana's biggest Hiplife artists such as: Ruff n Smooth, Stay J, Tiffany and Kwabena Kwabena. 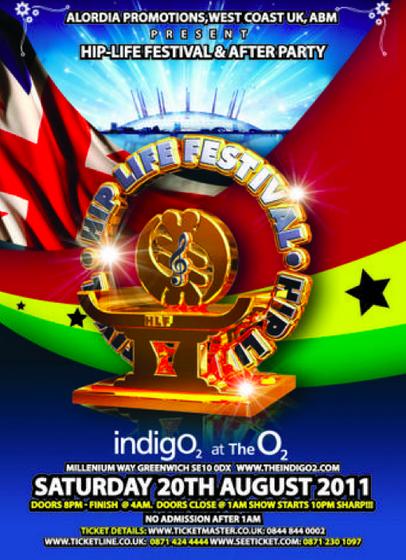 The team is very excited about bringing the Hiplife Festival and the After Party atthe Indigo O2 just as it did with Ghana’s 54th Independence celebrations in March.

Other performers include: Sunderland striker, Asamoah Gyan, who will 'do the dance' with Castro, while Atumpan will be entertaining the crowd with his popular single, 'Small girl you don't know the ting'.

The Hiplife Festival and After Party is certainly a night not to be missed. Alordia said, “We are doing it again but this time bigger and better, all over the UK. No long Ting! We have the right artists and the right venues. Don't miss it.”

Meanwhile the artists will also be touring the rest of the UK just after the London concert in cities like Birmingham, Leicester, Manchester and Milton Keynes.