If there is one area that requires urgent intervention today in Africa, it is the need to address youth unemployment plaguing the continent. From Lagos to Lusaka, from Conakry to Cairo, the statistics are damning. To put it straight, the future of Africa is gloomy and unpredictable as long as able bodied men and women, a lot of them graduates, are not able to get employment or job opportunities to empower themselves and their families. This crisis is caused by several factors, most of which are foisted upon the jobless by the society they live in.

As is widely known, Africa has the world’s youngest population, with more than 200 million people between 15 and 24. This has been attributed to the tradition of families on the continent encouraging couples to have many children while others believe that Africans are more fertile than other groups. According to a Mckinsey Global Institute (2010) report:

How many jobs will be available when these young people begin to search for work?

Many families are sending their wards off to school, which is causing a significant rise in graduates. But after school ends, frustration sets in because the kind of jobs needed is a far cry from what is obtainable. Among these frustrated graduates, some have joined bad gangs and have become threat to the society. Analysts contend that poverty borne out of unemployment and want are partly the cause of the Arab Spring, the Sierra Leonean Civil War of 1991-2002 (the youths participated mostly in this war), and growing insurgency in both East and West Africa. As argued by CODESRIA, “unemployed youth can constitute combatant reserves and are potential recruits for transnational organized criminal gangs…” 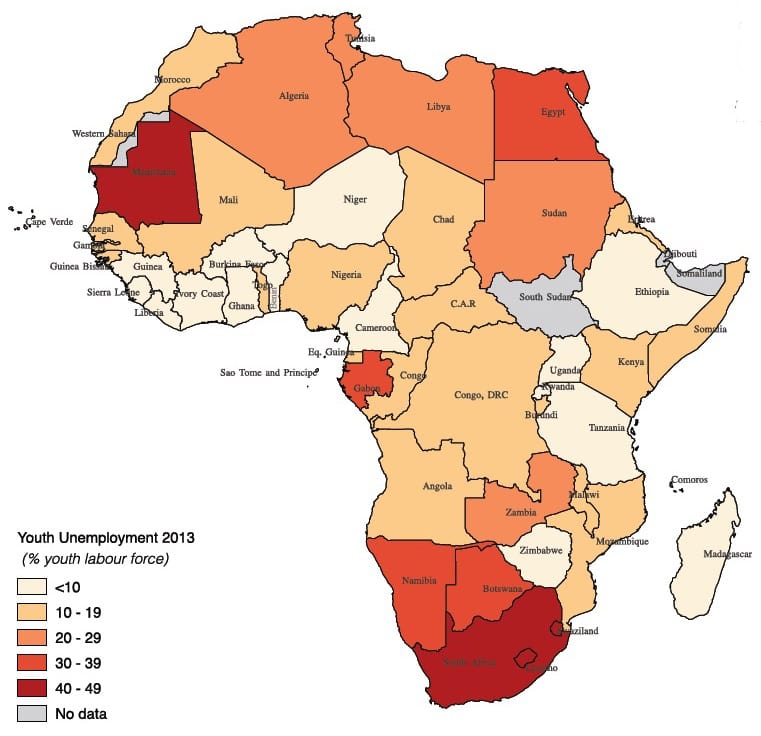 The examples of youth unemployment in Africa are copious. Nigeria is reputed to be the most populous nation and the “largest economy” in Africa ,with a rebased Gross Domestic Product (GDP) of $510 billion. However, despite high economic growth, poverty and unemployment are still high and growing. About 1.8 million young Nigerians enter into the labour market yearly, with less than 10% getting absorbed.

Getting a job in Nigeria is not about which school you attended or the grades you finish with, but how big your influence is and how well-connected you are. Evidence abounds of even first-class students parading through Nigerian streets and offices endlessly to find jobs. To secure employment in March 2014, about 500,000 desperate youths applied to join the Nigeria Immigration Service. Due to the large turnout and as a result of government negligence and ineptitude, about 16 job-hungry graduates died in the stampede that occurred at the various test centers.

The situation has become so hopeless that some applicants have been giving themselves awards. If you have applied up to 200 jobs without success then you are a “Senior Applicant of Nigeria (SAN).” How sad!

In South Africa, the country with Africa’s most advanced economy and military technology, the official unemployment rate in the country is about 25 percent. In a recent report by Al Jazeera,  out of 2000 people who apply for a job, only five got a call back. This is not so different from other African countries, from Ghana to Zimbabwe.

It is thus difficult for young people to participate fully in governance and leadership in their respective countries – they don’t have what it takes to command followership or “influence the electorates,” at least in African perspective. No wonder the average age of African presidents is around 55 years.